They say music is as balm to the soul, soothing and healing those wounded places hidden away in the deep recesses of one’s mind, and for a while alleviating the bitterness festering within. They say music stokes the fire of desire, bringing lovers together, minds resonating with one another, to places, feelings and emotions shared in times past. They also say music uplifts our souls to planes devoid of language and logic, teasing the senses with fleeting glimpses into a world of eternal tranquility, and if you’re lucky, into the timeless dance of creation itself. The first picture that comes to mind when I think of the bliss that is music, is from Shawshank, Andy Dufresne lounging in the warden’s chair, listening to Mozart, eyes glazed and for a few moments transported into a place nobody can enter or disturb. I don’t think Tim Robbins play-acted this particular scene, if he did he truly is a bloody marvel!

In my case and as probably is for most of you, the tunes I’ve listened to have constantly changed with the passing of time. Most stuff you listen to as a little kid are those which you have no choice or control over. At that stage, the realms of tune and melody are still new, still pristine, you take everything that is given to you with a sense of wonder, unbiased and without judgement. This is the phase of music you probably cannot relate to among your peers in the years to come; this is the time of songs that will take you back to the earliest memories of yourself, hazy and poignant.

The songs I recall from these early periods of my life are mostly from Malayalam movies, played over and over at my grandparents place, and a few Kannada songs in turn at our home in Coorg, thanks to Doordarshan. Next, came an entire generation of Tamil songs by the immortal Rahman, mostly heard on car stereos while I was traveling around during term end vacations. Those days of prancing around to Muqabla muqabla, trying my best to impersonate Prabhudeva are still etched so vividly in my mind. I never stayed with my parents during summer breaks as far as I can remember, and those were conceivably some of the best times of my boyhood — always being packed off to some relative’s place or the other, a welcome hiatus from the music usually played at home. 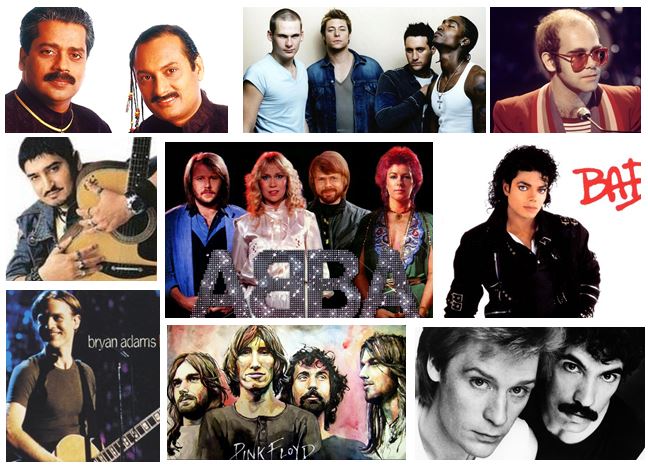 Faces I grew up listening to!

As the years moved from tape-recorders and Walkmans to CD-players and MP3 Players, my favourite artistes changed as well, following the patterns of “wannabe” teenage gawkiness to the listlessness and indifference favoured among college youth. Those years spent in hostel, a multicultural melting pot in itself, exposed me to a vast assortment of music, and allowed me to pick and listen to several genres, finally leading to the development of specificity in terms of taste (oh, the agony of choice, it felt like entering a supermarket for the first time in my life). It was also here, that I saw and accumulated the biggest collection of movies that could be desired, oh yes! Name it and I had it! This in turn culminated in my gathering some of the best movie soundtracks (OSTs) composed until then. I had one for every occasion, be it going to the gym, running, sitting in the bus, hiking, assignments, unrequited love, depression, loneliness, joblessness and so the list goes on and on (I am pretty sure most of us did and still do this, you should see the names of some of the playlists we carried around at the time!). The working out/pre-exam music almost always began with “Eye of the tiger” by Survivor, tracks from Rocky being absolutely mandatory when doing push-ups or weights. I still hear our rooms echoing to the trademark numbers of Maiden, Metallica, AC/DC, Floyd, Zeppelin, even Rammstein at times when things got really hairy. I’ve lost track of the number of times the tunes from Kevin Bacon’s Footloose and Quicksilver helped me run circles around the football ground. When I listen to these songs today, it feels like a part of me is suddenly transported back into the distant past — to a specific location I’ve associated with each particular tune, and for a moment, I end up looking like Tim Robbins in the Prison warden’s office (oh well, on second thoughts maybe not as cool as him!). 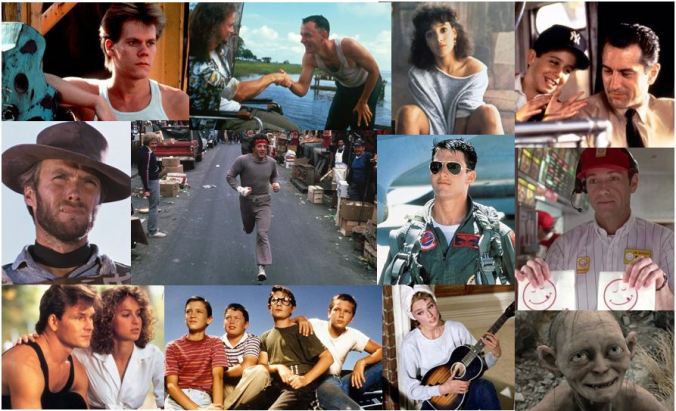 For some reason, after my undergraduate years, my taste in music seemed to progress in reverse chronological order. When my peers were listening to the likes of Adele, Rihanna, Pitbull, Sheeran and so on (okay, so that’s as far as my knowledge goes), I moved back in time to the 70s and 80s, listening to the likes of Hall and Oates, The Outfield, Beegees, China Crisis, Springsteen, Men at Work, Phil Collins, Billy Joel, Fleetwood Mac, Toto etc., Sometimes, I even wonder if I arrived in this world a couple of decades late, but I won’t complain, oh no — especially when I have access to the likes of  ‘Youtube’ and “Spotify”, my gripes just vanish, whoosh! I really needn’t go into how accessible music is these days, right?

Movies like Guardians of the Galaxy and The Perks Of Being A Wallflower have brought many old tracks back to life in the recent past (thanks to remastered versions), I mean come on! – who doesn’t want to listen to stuff like  ‘Hooked on a feeling’, ‘Brandy’ or ‘Come on Eileen’ ? Oh, I could rave about the charms of rock ballads and old man voices all day long! Okay, I think I leave you with that for now, and if you’re wondering why a sudden post (more like a ramble) about music, I’ll just say I found a love song from 1979 which I just can’t stop listening to at the moment (yeah yeah,  go on, think what you will!).

When we, as local leaders turn our privileges into platforms for action, a revolutionary change will soon follow

The life and times of an unusual doctor

Letters from a Stoic

My World – My Perception

To write well is to live well

The bitch, the bully, the basboobah and the writer.